Awesome Mehndi Designs For Every Occasion

Mehndi or “Mehendi” is an ancient form of body art native to the Indian subcontinent. The word “Mehndi” is believed to be derived from the Sanskrit word “Mendhika, ” and the art form itself can trace its origins back well over a thousand years to a time when it was used widely in Vedic rituals. In Mehndi art decorative designs are drawn on a person’s body using a type of henna-based paste. These designs are both intricate and delicate and as the practice has spread the number and significance of the designs have taken on different meanings in different cultures.

Today there are Indian mehndi designs, Arabic mehndi designs as well as Pakistani mehndi designs. To a lesser, but still significant extent, Mehndi designs has made inroads into the cultural landscapes of Nepal, Bangladesh, and the Maldives as well. In the West, the art form has been widely adapted to serve a more secular, purely decorative and less symbolic function. 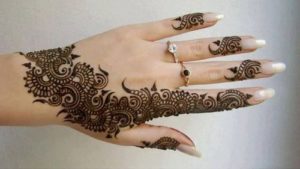 The exact reasons why the henna plant was chosen as the primary vehicle for mehndi designs is unclear to this day although it is theorized that the plant – which is believed to have originated in Egypt – was brought to the subcontinent by traders more than 1,300 years ago. Those traders – apparently aware of the fact that their pharaonic ancestors used henna to color their hair and nails – sold it to their Indian counterparts as a type of makeup.

It seems that almost immediately it was put into the service of decorating women’s bodies during various ceremonies such as weddings when mehndi designs were/are applied to the hands and feet as a way to represent the inner sun bursting forth. Over time men adopted the practice as well although never to the same extent as women and in a generally more restrained fashion.

In early Vedic rituals, mehndi designs were used to symbolically represent a person’s “inner light”. Vedic beliefs rested upon the idea of one having an outer and inner sun and the mehndi designs, as alluded to above, represented the awakening of the inner sun. While artists and scholars sometimes disagree over the precise meaning of certain mehndi symbols there is the general consensus on the following motifs:

Bud – Buds and leaves in India typically grow at the end of a period of drought. As such in mehndi art, they typically represent rebirth, happiness and even fertility. This interpretation helps to explain their popularity as a wedding day motif.

The Zig-Zag – This symbol is commonly understood in India to represent rain. As such it alludes to fertility, nurturing and abundance; all associations that make it ideal for weddings.

The Scorpion – The Scorpion is equated with love due to the fact that the stinger poised to strike is seen as a powerful metaphor for arousal. The effects of the scorpion’s sting also stand in for symptoms of a broken heart (pain, shortness of breath, anxiety).

Ripples – Water is a powerful symbol in nearly every culture on earth, and Indian culture is no exception. In mehndi Desing, water symbolizes purity and is also valued for its ability to bring life.

Game symbol – This is one of the oldest mehndi symbols and appears at different times and in a variety of different ways in Indian culture. Generally speaking, it represents joy and/or happiness.

The Eye – In mehndi art the eye is utilized in much the same fashion as it is in Turkish art. That is to say as the so-called “evil eye” which reflects evil wishes back onto the gazer.

Reptiles – In Indian culture snakes, lizards and other reptiles are sometimes considered seekers of enlightenment. This may be due to the fact that many forms of lizard are attracted to light.

Other popular mehndi symbols include:

While mehndi symbols still carry significant weight among the people of India in particular, in the West the practice has been largely sterilized into something strictly decorative with the symbols employed often having little to do with the context in which they are used. For this reason, many purists refer to this Westernized mehndi art simply as ‘henna tattoos.’ In fact, this term is not entirely accurate either since tattoos entail permanent imagery being applied to the skin using needles.

It should be noted too that true mehndi artists are few and far between and many of the people who create henna tattoos have never undergone actual mehndi design training and are simply winging it. Many of them will use ready-made henna cones, which are like icing cones used to decorate cakes. Traditional mehndi artists, however, would never consider such a thing and insist on creating their own material using fresh henna leaves the ground with oil.

In mehndi design, the henna paste is typically applied to the skin via a paintbrush, stick or, in more modern settings, a plastic cone. It usually takes around 15-20 minutes for this paste to dry but before it does a mixture of white sugar and lemon juice is often applied to hold in moisture in order to obtain a darker stain at the end of the process. The “painted” area is then thoroughly wrapped so as to retain said moisture and as a way to lock in body heat, which will also help darken the final composition. Although the wrapping of the painted area is not a traditional approach, it has been widely adopted as a way of achieving a more satisfying result.

After several hours the wrap is removed, and the exposed design gradually darkens over the subsequent 1 to 3 days as it is oxidized by exposure to the air. Whether a strictly traditional method is used or this modified method that utilizes the wrap, the final product should last for approximately 2 weeks, give or take. Individual results will vary depending on whether the wrap technique was used, the oil content of the recipient’s skin as well as that person’s skin tone. The life of the mehndi design can be extended somewhat by using olive, sesame or coconut oil.

The use of Mehndi art is probably associated more with traditional wedding rituals than any other type of use. And for a good reason. Mehndi has been a part of Indian wedding ceremonies for more than 1,000 years. While wedding rituals vary from region to region and all have changed slightly or been refined over the years Hindu tradition typically holds that 1-3 days prior to the wedding ceremony the bride and groom attend a painting ceremony together during which the bride’s hands and feet are adorned with mehndi art. Many mehndi artists will include the initials of the groom in their elaborate mehndi designs (It’s unclear how far back this practice goes with many suspecting it has more contemporary roots). Such an event is usually a festive affair with lots of traditional dancing and song and the women dressed in beautiful, vibrant costumes.

In Bangladesh, mehndi ceremonies are often two-part events with one part occurring at the home of the bride’s family and the other hosted by the groom’s family. In Pakistan the mehndi ceremony is typically celebrated only by the bride’s family; although it remains one of the most important rituals in the lead up to the wedding.

Mehndi and Henna Tattoos in Other Countries

As noted above Henna is believed to be native to Egypt, and the process of staining the skin for decorative effect likely originated there some thousands of years ago. Therefore it should be no surprise the mehndi – or at least an art form akin to what we understand as mehndi – is still present to the current day throughout North Africa and the Arabic world. In Arabic cultures, these henna tattoos are applied for a variety of reasons including weddings, the birth of a child, engagements, family reunions, birthdays and all manner of other celebration. Historically, members of various armies have used henna tattoos to commemorate important victories while people across the region have used them to mark important religious observances. In a nutshell wherever there has been cause for celebration in the Arabic, Persian or Palestinian world mehndi-like artwork has been an important part of the festivities.

Mehndi art began as a simple, intimate way to mark the transition from one period of a person’s life to another. Today, it is still employed to signify important events and milestones while at the same time it’s found new life in the West as a purely decorative form of body art for the masses. The methods and reasons for which it is employed however don’t seem as important as the fact that this age-old art form doesn’t appear to be fading away into the mists of history anytime soon. On the contrary, it seems to have found a permanent place in the pantheon of significant cultural touchstones.